Showing posts from January, 2015
Show all

January 30, 2015
You get to hear me read more from The Mystery at the Ski Jump, by Carolyn Keene; the ghost writer for this is Alma Sasse. And it's the original book of #29 in the Nancy Drew Mystery Stories.
I'm broadcasting live in 1 hour and 46 minutes! Listen in soon at http://tobtr.com/s/7298679. #BlogTalkRadio
Post a Comment
Read more

So now not only am I typing on a bigger keyboard, I can also make my videos on YouTube. I am still working on the first book of Aquatica in its trilogy I call The Ventures of a Mermaid. Currently, part 5 is being edited for the channel. Meanwhile, I'll be making dance videos, lyric videos, and karaokes.

Yeah, I'm noticing all of it is music. Don't worry. Once I get my pro account back with Screen-O-Matic, I'll be doing the game walkthroughs/playthroughs on my other YouTube channel. I won't be able to finish Journey To The Center Of The Earth, unfortunately; I wish I could. I'll probably try installing it one more time to see if I can record with SOM.

Writing On A Regular Basis

January 25, 2015
You know, I've been thinking about this for some time. It made me realize something. I write more on Twitter and my Facebook page than I do on here. And I want to change that.
No, I don't mean stop my blogger page. That's like saying I quit a hobby, and I don't normally do that. Also, I'm not going to stop using Twitter or Facebook. Having more than two platforms to frequent kind of overloads me sometimes. I want to write on Blogger more, and I have somewhat put a boundary on myself to only update all of you.
I think what I'm going to do is journal more. Yeah, it doesn't hurt to update all of you. Especially since my radio show and my YouTubr channel might get more views now. I won Athlete Of The Year 2014, for Special Olympics, and they plugged both of them in the nominees pamphlet under my name.
Also, not a lot of people trust the Internet, myself included. So I can't really exploit my life too much. I will try to write more often though. Not just in upd…
Post a Comment
Read more 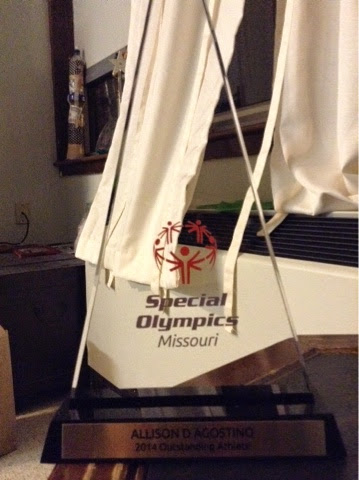 Friday and Saturday, there was a leadership conference hosted by Special Olympics Missouri. The woman in charge, Diane Brimer, asked me a month ahead of time to give some speeches during the awards luncheon. I would have done it if I didn't have to miss work. Last week, though, she told me the real reason she wanted me to go.I was nominated for Outstanding Athlete. ^_^ I immediately asked my boss to let me have the day off. I had so much fun at the conference. I even made some new friends. I did a great job giving those scripted speeches. And to top it off, the girl had a difficult time reading my name as the winner for Outstanding Athlete. Yay! While I walked on stage, I had wished my family was there to see it. Wish granted! I heard someone shout "way to go, Allison!" The man presenting all the awards came to me and asked if I recognized the people holding single letter posters spelling my name. O_O I'll tell you one thing. I am a bit pissed. My family knew for more …
Post a Comment
Read more
More posts